A Dream's Command is a little RPG that just barely fits in a PICO-8 cart, using all of the available code, texture, audio, and map space.

It takes 45-ish minutes to beat, by my estimate.

NOTE: The icon for the Z key in-game looks like (O), as is standard with PICO-8.

If you stand still for a few seconds, you can view your current status.

You have three basic types of skills you can use in combat: Attacks, Spells, and Actions. In order to use a skill, you will have to perform a quick minigame to determine its effectiveness. As you level up, you will unlock more skills.

Attacks and Spells are offensive. The base damage they deal is determined by how well you execute their minigame, but the final damage dealt is also affected by the enemy's defense against the chosen type of skill. Higher-tier Attacks and Spells are more powerful, but also harder to execute.

Actions are defensive, and there are only two available: Flee and Recover. Flee exits a battle (if executed correctly), while Recover restores up to half of your maximum health and can cure status effects.

Lastly, there are three status effects which enemies can give you: Poison, Dizzy, and Panic. 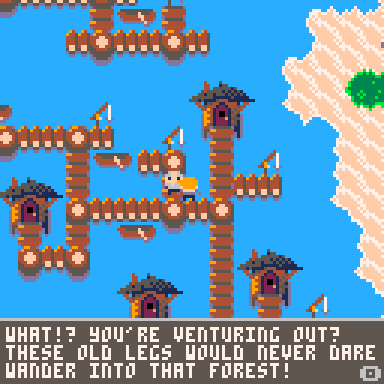 This game was originally released on the PICO-8 website in July 2017.

You can still find and play it there: https://www.lexaloffle.com/bbs/?tid=29727

Cool stuff man, it's like if Earthbound were on the Atari

Cool stuff! I beat the boss on level 8. anyone do better? I think I could have done it on level 7 If I was better. I agree the encounters are a little too common. I also thought there should be different effects or mini games for the different powers. The way it is now I just used whatever my newest power was.

Thanks for making this!

Thank you, and nice work!
The idea with the different powers is that it's a risk vs reward system: the higher the strength, the easier it is to screw up the attack. So sometimes (especially if you've got the Panic status) you might need to use a weaker attack to try to ensure you hit at all. This could use some tuning to make sure it's working as intended, but that's what I was going for (I also don't really even have the tokens available to do something more complex than that). And yes, I'll look into tuning the encounter rate further.

Awesome! I did actually notice the Panic status made things a little more difficult, and at one point I did turn to a lower power to guarantee a hit.

Really fun game! I like what you have created with pico-8. The music and story was great and overall I enjoyed the game. Like some other people said, I also felt that maybe there were a few too many encounters, or too often. Other than that this was really great, keep up the good work :D

I don't know if you've heard of Game Development World Championship before (gdwc2019) but it's a competition for indie game developers where they can submit their games and it's free! It's great if you want some more visibility for the game and it only takes a couple of minutes to join :)

Thanks for the kind words!
I can look into tuning the encounter rate in my next update.

Also I haven't heard of GDWC before but yeah, I could consider sending something in.

Reply
The GDWC3 years ago

Pretty good! My only complain is encounters being too frequent, which interrupts exploration A LOT

Thanks for playing!
And yeah this is long overdue for a quality of life update, and that's definitely one of the things I'd like to tweak with it.

Very very cool game!  WATCH OUT FOR BATTLEBUGS though, and those shrooms that poison you. I AM KING OF THE BEACH!

Woah, thank you so much! That's awesome to hear!
(Those poor Ballcrabs and Grumpsnails never stood a chance!)

Heya! Really good game, and fun so far. Encounters are a bit too common maybe? But great set up, and it works really well! :)

Reply
Ofihombre4 years ago
Looks very good RPG game made in Pico-8 after the Picomon.
Reply